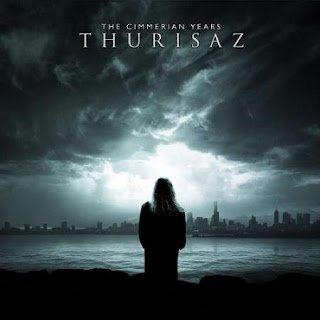 The evolution of extreme metal is one of the great musical mysteries of our time. How can one explain the transition from the barbaric aggression of Venom and Hellhammer to the the dynamic musicianship and compositional complexity of groups such as Opeth or Enslaved? The very genre that at one time seemed intent on defying all things musical has arguably become one of the greatest creative forces in the world of music, and all this in less than thirty years of existence.

I bring this up for one specific reason: however dramatic early extreme metal could be, its rather simplistic style left little room for emotional or compositional subtlety (see Venom's ill-conceived "At War With Satan" for a hearty laugh or two). The aforementioned evolution made way for greater variety and depth within the extreme metal style, with a number of bands entirely forsaking straightforward aggression in favor of a more sorrowful, "yearning" sound. This is the paradigm in which Thurisaz is operating.

The material here can most accurately be compared to Primordial, albeit with a more modern tone (as evidenced by the vast cityscape gracing the front cover of the album). Speaking of the album cover, it seems to be representative not only of the musical tone of the album, but of the lyrical tone as well. At once angry, mournful, and reflective, the lyrics seen to come directly from the solitary figure on the front cover, who we can only imagine is staring at the distant city with a confusing mixture of disgust and longing. Emotionally, this is a very deep and complex album, which should be listened to in its entirety, with lyrics at hand for the full effect.

If there is one reason to recommend "The Cimmerian Years," however, it is the atmosphere. Like I mentioned earlier, the music here has a lot in common with Primordial - this is the kind of album that builds an atmosphere through a series of songs that are simultaneously pummeling and vast, with a number of well-placed quiet parts throughout the album. There is nothing very technical or flashy here, but this actually works to the band's advantage, as it keeps the epic atmosphere at the foreground of the music.

This isn't to say that this is a perfect album. The atmosphere, despite differences between songs, remains relatively unchanging, lending the album a "same-y" quality over the course of a listen. The vocals, which include guttural death growls, black metal rasps, clean singing, and the occasional whisper, are fine, but nothing to write home about (although the black metal vocals are generally pretty good). However, "The Cimmerian Years" is overall a strong release, and one that I would recommend to anyone looking for a good slice of atmospheric metal.
- - -