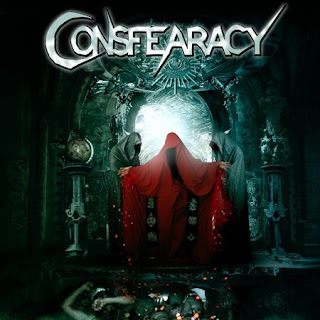 ---
So here’s what you need to know about Consfearacy’s self titled debut album: It aims to be heavy, and it succeeds. It aims to be dark, and it succeeds. It aims to be aggressive, and it succeeds. Vocalist Brian O’Conner attempts a very powerful vocal delivery, and he delivers. There are strong rhythm sections, and a driving drum presence. The problem is not execution then, but ambition. For everything that it does right, I can find precious little on this album that stands out as extraordinary. Everything on the album fits into a very neat little box, a box of raging, head banging, horn throwing heavy metal, but nonetheless, the type of stuff that’s been done a thousand times before, and will be done a thousand times more.
There are hints of Iced Earth, strong hints of Iced Earth, in fact, Jon Schaffer would be wise to call this guy up once his next vocalist decides his real life ambition is to drive an ice cream truck. The issue is that the rhythms and melodies all feed into a very in-your-face atmosphere that leaves little room to really explore any musical quality. There is just a very bad case of "every song sounds the same"-itis going on here.
Admittedly, Consfearacy has a metal edge to make some of the more respected European Metal bands blush, but I have to take issue with this gem from the band’s biography “CONSFEARACY writes about controversial topics surrounding conspiracy theories, the new world order, spiritualism, relationships and end of days prophecies.’ Allow me to explain why Progressive Metal can get away with a concept album about the broken family relationships and worldly disconnection caused by overmedication of kids with autism, and power metal writes concept albums about dragons. When your vocal style is derived around sounding extremely tough, and delivering a hard hitting, gruff performance, your voice loses a certain quality to it that allows you to really get the point across about poetic and artistic lyrics. Maybe it’s unfair biasism, but I wonder if the band invests too much time in writing “Serious lyrics” (and without a lyrics sheet in front of me, I can’t attest to how well the treat these issues) and not enough towards giving their music a creative edge, as opposed to a simple aggressive edge.
What has always been exciting to me about the ever expanding world of metal is the opportunities for bands to expand into new influences, or to try new things. In this type of climate, Consfearacy shows up perhaps a bit too late to be anything more than some well executed, but highly generic heavy metal.