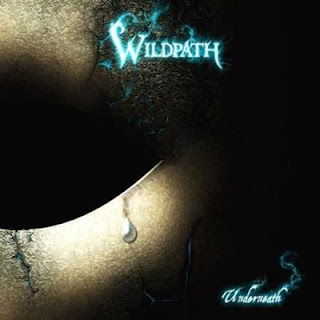 Wildpath
Underneath
2011
-
Some of the most exciting music deserves the recognition that it gets because it drops the heavy end of the hammer upon the listener at the very first opportunity- the first few moments of the first track. Power metal, especially of the symphonic variety, has fallen into a sad rut of ceaseless short ambient intro tracks. Sure there are a few that are superb, but the vast majority descend in mediocrity, and end up taking much of the album with them. As you've surely guessed by now, French symphonic metallers Wildpath have sent me reeling with the intro to their latest release, entitled "Underneath". Rare is the minute-and-a-half ambient tidbit that causes me to completely stop what I'm doing and listen breathlessly. Rarer yet is when the following, proper opening track is well worth having held my breath for.

While the stupendous effect of the first couple tracks doesn't last the duration of the album, it sets the tone for a band stepping from their sophomore effort into the stride of a professional career. Granted I gave "Non Omnis Moriar" a skip, but there was plenty on "Nyx Secrets" to keep me interested, and the band has taken a substantial boost in sound quality since then. They've also gone for an impressive mixture of sounds. While the first few tracks are almost purely symphonic power metal in all its bombast, "Reviver" hits the listener hard with a strange, almost big-band swing sort of sound during the chorus. Add a dreamy hammered solo section with some synthy background, and you've completely changed the pace of the album. "The Craft" follows right up with a strong, electronic beat mixed with strangely organic tonal percussion (A marimba perhaps? Real or simulated?) before being driven before a wall of distorted goodness.

Let's talk vocals. Ms. Marjolaine Bernard was, at first listen, the kind of female vocalist that I was about to find vexing. Heretofore, softer and less bold singers of her mold have only served to muck up all the good things about the albums that they were fronting (Highland Glory, Kerion). However, I was mistaken, and I beg the lady's pardon for having been wrong about her. Ms. Bernard not only stays in tune, but actually works her less poppy, less aggressive tone into Wildpath's more experimental form of symphonic metal rather splendidly. Sure she's not quite as bold or as crisp as I might like her to be, but there's definitely something distinctive about "Underneath", and you definitely won't mistake it for anything of lower caliber.

So, suffice to say I'm rather pleased with this work on the whole. It's about time that the good nation of France had someone stand and deliver a great performance while the rest of their countrymen are faffing about with being too commercial for their own good (Heavenly), letting awful singers ruin their work (Kerion), or confining themselves behind language barriers (Manigance, though they're actually rather solid). "Underneath" is a VERY symphonic (do not read: overly orchestral) and somewhat daring release in terms of arrangement, rhythms, and melodies. Any self-professed symphonic power metal fan will revel in its fresh approach, and many others will likely find it a cut above the rest.
- - -
The Protagonist's Rating: 4.0 out of 5

Posted by The Protagonist at 5:03 PM

I first heard of Wildpath in 2009 when I first signed up with Last.fm. I gave them a listen and wasn't super impressed. I hate it when bands say "if you like Nightwish, you'll like us", or something along those lines, because I always get disappointed!

I'll give these guys a second go, though, and see what I think of their newest CD.

This youtube clip is the intro track and the first full song. I think they're rather wonderful. It's pretty indicative of the growth that they've seen. :)