Powerwolf - Blood Of The Saints 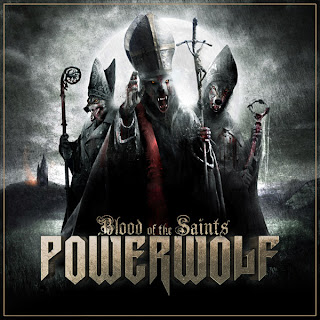 Powerwolf is, without a doubt, one of the more unique power metal bands in terms of sound, themes, and appearance that I've ever encountered. Their 2007 release "Lupus Dei" caused a great stir, and no shortage of critics declared it one of the better new albums for power metal in the last decade. While not quite so vocal about this myself, Powerwolf have a dark and powerful magic all their own. With the release of "Blood Of The Saints", they've further expanded on what's been laid out by "Lupus Dei" and "Bible Of The Beast". At first glance, you'll get exactly what you're expecting: wolves dressed up in paraphernalia of the Catholic church, bearing holy symbols and feral grins. One might continuously wonder, as I, what the band's angle is on the Catholic church and their beliefs, since much of what they write about is extremely dark and dealing with corruption and depravity. However, their website states that their music is for the "honour of God", and so it would seem that they've simply found a very unique way of expressing their beliefs, which I find admirable to some degree.
Like Sabaton, Powerwolf is a band that has settled into a cozy corner of the power metal scene, and continue to release very similar albums. Also like Sabaton, their latest release is perhaps the best example of polish and advancement in their production. And finally, they've also encountered the same difficulty that Sabaton has: running out of original material to sing about (Author's note: Powerwolf does not SOUND like Sabaton, though you may now believe otherwise). Myths and legends about werewolves, demons, etc. are all well and good, but there's only so many times you can pack the words "wolf" and "blood" into a song title on an album before we the listeners begin losing interest. "We Drink Your Blood", "All We Need Is Blood", "Son Of A Wolf", "Night Of The Werewolves"- you get the idea.
However, I for one am willing to forgive them this transgression for one reason and one reason alone: this album rocks. Listened to back to back, the songs here could get tiring after a while, but if you mixed them into a playlist and heard them individually, you'd enjoy every single one to the fullest. For this reason, I almost feel that this album is better shuffled or mixed into a larger list in order to prevent Catholic mythos burnout.
Me? I can listen to this album all day long. Attilla Dorn has one heck of a set of pipes on him. He sounds equally great in a latin style chant, a rapid power metal rush, and a huskier, low-register delivery. "All We Need Is Blood" is probably the only song that tire of on this entire cd, and the remainder of them more than make up for it. In fact, not since Wisdom or Solar Fragment's albums this year can I recall an album staying so catchy and involving. The band's pipe organs and haunting choruses in "Sanctified By Dynamite" and "Dead Boys Don't Cry" give way to some galloping power metal classics like "Murder At Midnight" and "Night Of The Werewolves" for a reasonable amount of variety in tempo, if not thematic material.
If you're into power metal and don't mind the band's style, grab this for sure. If you are more the death or thrash type, you might actually enjoy this much more than standard power metal fare because of its darker appeal and sheer professionalism. No two ways about it, this is a strong album musically, and if Powerwolf ever gets around to sinking more real time into their lyrics, they could really threaten the metal scene with something truly tremendous.

Posted by The Protagonist at 5:33 PM

I heard about them a while ago.
I really loved the darker power metal style. Normally I don't like power metal all that much, because of its happy sounding. Normally after one or two songs I've had enough, but I can listen to an whole album of Powerwolf without getting bored about the happiness.
Great they released a new cd. I didn't know, I'm certainly going to give this a spin.