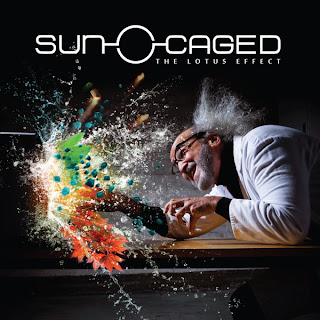 Sun Caged
The Lotus Effect
2011
-
One day, I’ll finally come to terms with the progressive metal genre, and finally accept that it’s a genre with a mass of potential that I formerly let be ruined by a wash of uncreative wankers. But for that day to come it’s going to take a lot more bands like Sun Caged to populate the genre.
Sun Caged comes from the brand of highly technical, somewhat dry progressive metal that I tend to absolutely despise. Bands of a similar ilk are notorious for filling their songs with some sort of mathematically precise, near impossible drum pattern, and a guitar riff that would take most mortals three years to learn. Which is really impressive, and takes a lot of talent, but lacks the sort of creativity and musical heart to make me actually believe that it’s another more than lame showing off.
Sun Caged however, takes the generally highly technical formula, and fills it with a rich melodic ingenuity, creating a sound palette with everything from the soaring vocals and screeching guitar solos, to slap bass and pounding piano rhythms. Short melodic pieces like “Parasol” serve as a brilliant contrast to the rest of the album, somewhat in the same style that the acoustic sections on Sabbath’s Master of Reality gave perspective to just how crushing “Lord of this World” or “Into the Void” is.
What allows Sun Caged to show off their technical abilities in such a satisfactory way is that instead of the vertical growth that their peers do, always getting more and more complex, Sun Caged moves horizontally, creating complexity by integrating a greater variety of influences and elements.
The vocal performance on the album is very strong, and the lyrics are written with a certain poetic element. For those that read the best of lists at the beginning of July, this album was in my top 5, and I certainly expect it to stay in contention for album of the year come December 31st.
___

And they are dutch =D