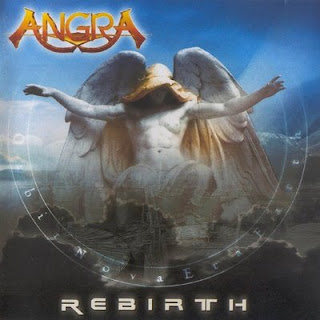 Angra
Rebirth
2001
-
I consider "Rebirth" to be Angra's magnum opus, their swan-song, etc. Whatever you want to call it, it is one of the works that I feel is nigh-unequaled in metal. This is Angra after their schism. The departure of Ricardo Confessori, Andre Matos, and Luis Mariutti paved the way for their replacements. Aquiles Priester, Edu Falaschi, and Felipe Andreoli respectively put the band into overdrive with their arrival in 2001, releasing a speedy and emotive power metal masterpiece. While less progressive than most of Angra's catalog, "Rebirth" proves that Angra are also absolute masters of the power metal genre in a simpler form as well.
Reviewing "Aqua" earlier this week put me in the mood for some of the rest of Angra's work. It's not that often that I return to listening to "Rebirth" in it's entirety, and this week marks the first time in a long time. If you're not so familiar with this album, please check out a couple of these links!
Angra- Acid Rain

Posted by The Protagonist at 5:52 PM

Email ThisBlogThis!Share to TwitterShare to FacebookShare to Pinterest
Labels: Album of the Week