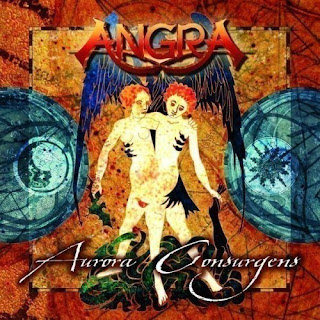 Angra
Aurora Consurgens
2006
-
Aurora Consurgens, Angra's sixth full-length effort and third with Edu Falaschi, is one that I've heard slandered a great many times. Even myself preferring both Rebirth and Temple of Shadows, I have perhaps given it a bad name in the past. I received this album a little more than a year after it came out, and at the time I recall thinking that it was so dull compared to the aforementioned efforts, as well as seeming like the band had moved into slightly more commercially acceptable territory. Now, after the release of the mellow but sublime Aqua, I can look back upon my foolishness. This is, after all, Angra: the increasingly proggy giant of power metal that it is. On Aurora Consurgens, we behold again the same sleek and mighty machine, if just a bit stripped down.
In true Angra fashion, the opening track is rather explosive. However, it takes a noticeably native percussive turn (a la "Holy Wars") in its introduction. One thing is very clear as the initial tracks ("The Course Of Nature" and "The Voice Commanding You") break over the listener: Angra is continuing their evolution from lighter, neoclassical, and slightly folky power metal to a deeper, heavy, and more mature sound. Dealing with psychological disorders, depression, and suicide, the lyrical content is considerably darker and may come as a bit of a shock, especially to Matos-era Angra fans. Despite the dissimilarity in sound, this almost reminds me of Dream Theater at times in this respect, as well as the fact that Angra seems to occasionally borrow a riff or extended rhythmic motive from said band. Whether this is an intentional homage or merely a coincidence is only mine to speculate.
Like Temple of Shadows, Aurora Consurgens carries its surge through the first half of the album, but seems to lose a bit of its creative steam about halfway through. For me, this occurs after "Salvation Suicide", and while the difference isn't great, it somehow feels like Angra running at 90% rather than full tilt. This may be imperceptible or perhaps not true at all for others, but this seems to me to be a consistent but minor flaw in the band's post Rebirth releases (perhaps it's just the ordering of the songs). The exception here being the brief finale "Abandoned Fate", which is a plea for those suffering from mental disorders. More emotion seems to flow from this final track, however short, than from several of its recent predecessors combined
Naturally, 90% for Angra is still better than anything a great deal of bands have to offer, especially in the department of delightfully intricate and interwoven guitar lines. Loureiro and Bittencourt remain one of my very favorite guitar duos to this day, and this release continues to exemplify just how well they seem to supplement each other and become greater than the sum of their (admittedly impressive) parts. Songs like "Salvation Suicide" and "The Voice Commanding You", despite Falaschi's best efforts, are unmistakably born aloft by the hummingbird-like pulse of some of the best twin guitar work the metal world has ever witnessed. Falaschi, on the other hand, is allowed plenty of opportunities to stand forth on this work. Slower tunes like "Breaking Ties" and "Abandoned Fate" allow him to showcase his gentler side, while the quicker tunes showcase his impressive lungs. It should be noted that Aurora Consurgens sees Edu attempting to become a more diverse singer, and making great strides at that. This change develops considerably further in 2010's Aqua as well.
When I revisited this album in depth, I was thinking of it as relatively weak for Angra. However, my revisitation has ultimately proved to me that even on a darker, less consistent endeavor, the band that I know and love is able to excel and evolve in ways that I simply hadn't noticed at first. However, despite the guitar work being second to none, I feel that the heavier and darker direction makes this a less unique and exceptional effort compared to the band's other work. This being personal taste, I can fully understand and respect many other critic's thoughts as this being one of the band's most mature, straightforward, and best releases. Regardless, Aurora Consurgens, like all of Angra's material, ought not to be lacking from the library of any that would call themselves a power/prog enthusiast.

Posted by The Protagonist at 3:58 PM