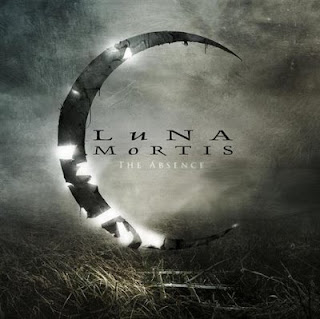 I first heard of Luna Mortis a few years back when I was trying to delve into local (or pseudo-local, at least) bands. At first, their harsh vocals put me off, but I've since come back to this album to explore it on a number of occasions, and it has grown on me immensely. I don't even remember where I purchased it, but the band sadly split up in early 2010 and has now moved on to other projects due to some measure of internal tension between members (as I understand it).
Hailing at one point from Madison, Wisconsin, Luna Mortis plays a very modern, harsh version of progressive/melodic death metal on this, their one and only full-length release, "The Absence". Appropriately named, perhaps, the album begins with song titles such as "Ash" and "Ruin" while the aggressive tone drops the album immediately through a crunchy descent of darkness and despair. As the chorus of the opening song concludes: "All is lost in ash!" Adding to this rather bleak atmosphere are the scathing harsh vocals of Mary Zimmer. Initially, this was what put me off the album, and as I'd heard precious little of women utilizing harsh vocals at that point, it struck me as particularly brutal (relatively speaking, of course).
Thankfully however, the band rises out of the ravine through which the first few songs run, and though the atmosphere is more or less maintained, there are a couple of bright spots: most notably the excellent "Forever More". A driving, up-tempo and considerably more upbeat song, this track is both my favorite on the album and a refreshing change from the omnipresent murk surrounding it. It's also home to one of the best guitar hooks on the album, which is guaranteed to stick with you long after the song and album are done and gone.
Highlights abound here, and while Zimmer isn't the most fantastic vocalist, her alto range and more husky tone is quite well-suited for Luna Mortis's style of darker progressive metal. I mentioned her harsh vocals earlier, and while they initially drove me away from this album, they have now become part of its magnetism. This tormented howling is a part of the emotions of fear, desperation, and defiance that pervades the album. Despite being labeled as proggy, this is very modern and quite accessible, and many of the guitar leads are very easy to get into and bang your head with. It'll probably bore some of the more technical prog-heads, but it's likely that many of them wouldn't care for the vocals here regardless.
With great chemistry and good concise (yet technical) songwriting skills, it's a wonder to me how this band got in such a train wreck with all of the great things that they had going for them. As it is, however, "The Absence" is fated to remain something of an anomaly in the lesser-known landscape of American metal. I recommend to anyone with a taste for dark melodic metal to pick this up and give it a try, as it is surprisingly sustaining and rewarding for such a young band.
- - -

Posted by The Protagonist at 3:29 PM

Not really speculative, I've spoken to and read various comments from people who knew the band fairly well. Whatever the cause of the breakup, it seems common knowledge that internal conflict had at least something to do with it.