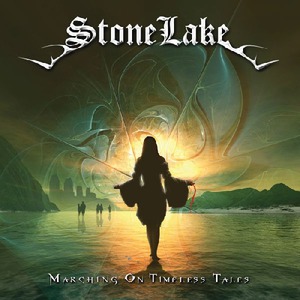 -
Contrary to its Finnish, German or Italian counterparts, it’s hard to describe what defines Swedish power metal. Yet somehow, when I first put on Stonelake’s “Marching On Timeless Tales” I immediately knew they hailed from the same country as Dream Evil, Manimal and Nocturnal Rites; all bands which I recognize in the sound of this melodic heavy metal outfit. That’s right, this is no straight-up power metal, but the similarities are easy to spot.
Stonelake certainly kept busy the last five years, this is their fifth album since 2006’s debut “Reincarnation”.  I’m not familiar with any of their older material, but let that not spoil the fun. From opener “Red Canyon”, with its slow pounding riffs and atmospheric keyboards, you know what you’re in for, especially when that firecracker chorus comes in: uncomplicated music built around strong guitar work and catchy vocal melodies. Aside from the Swedish component, I hear a familiarity with German acts Evidence One and Sanction-X. Both bands who do this kind of thing quite well.
The first half of “Marching On Timeless Tales” offers the most diversity. “Liar” kind of sounds like it could’ve been from Nocturnal Rites’ “Afterlife” up ‘til “Grand Illusion”-era. Manimal comes to mind with the slightly more complexly structured “Sound Of A Whisper” and “Fool With No Denial”, which feature powerful and sharply sung choruses bound to linger around for a while. More straightforward is the Dream Evil-esque rocker “SnakeChild”, whose vocal harmonies almost had me think Niklas Isfeldt was behind the microphone. But you get it, this is Swedish melodic metal at its best.
Sadly the album takes a plunge in the second half, with the less memorable offerings of “Lay Down The War” and “Winds Of Fire”. Sure, it’s still enjoyable, but the spark of the first half is mostly gone. “Marching On Timeless Tales” ends on a strong note though, with “The Temple”, not only in title a wonderfully melancholic echo to Nocturnal Rites’ “Temple Of The Dead”. So there you have it, Stonelake won’t change your life anytime soon, but if you like any of the bands I mentioned above at any point in their career (because I can see why people would be turned off Dream Evil's and Nocturnal Rites’ more recent output), give this a try and I guarantee you won’t come back complaining. If you do, direct yourself to the webmaster, he takes all my punches.
---
Arno Callens' rating: 3.5 out of 5
There is no music from this album available, our sincerest apologies.
Posted by Arno Callens at 10:56 AM